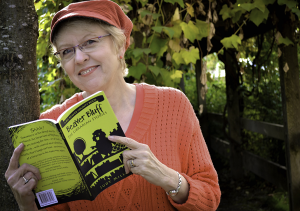 I write both humorous and serious short fiction and essays—although lately my focus has been on humour and performance pieces.

People ask me all sorts of things about my writing. Here’s what I say:

Why do you write humour?
I write to make myself—and then (I hope) my reader or listener—laugh. Every one of us is struggling with some issue, worry or loss. To lift anyone’s spirits, however briefly, is to give a gift. It makes me happy to try to give that gift.

How do you write humour?
I wish I knew. Erma Bombeck once said “Writing humour is fifty times harder than writing anything else.” I write both serious and humorous pieces, and I’m not sure about the “fifty times harder” part, but I am sure that writing humour is hard work (although it can get less respect in some literary circles, despite the fact that fewer people can do it). It is such satisfying work, though, when it succeeds. I know I have succeeded when I hear spontaneous laughter during a reading. Or whenever an editor sends me money. If you like my stories, by all means, send money!

How would you characterize your humour?
Hmm. Sometimes it’s gentle; sometimes I write with tongue firmly planted in cheek. I love to exaggerate, and to flirt with the outrageous. Humour is tricky. Tastes vary greatly, but I’m finding that many people like to go along with me on my playful, whimsical and wacky journeys. And if I can surprise them with a little twist at the end, so much the better.

I like to write about oddball characters. Mostly I focus on their human foibles—which, of course, I blow all out of proportion, for the sheer fun of it. Still, I think we all recognize in these quirky characters aspects of ourselves and of others we know, all of us caught up in this bizarre adventure we call life. I write about ordinary things: relationships; communication problems; the differences in approach between men and women; pet peeves. And even when I’m being irreverent or just plain silly, it’s all done in good-natured fun.

What about your serious writing?
It’s important to me. I’m proud of the recognition I’ve earned for some of my serious stories. I intend to release some of them as individual e-stories. The characters in my serious stories also tend to wrestle with themes of obsession or loss. Although people were happy for me whenever a serious story won a prize, I noticed they were always after me to write them another “funny one.” I love to make myself, and others, laugh—so that’s why I published Beaver Bluff: The Librarian Stories.

Tell me more about your children’s song lyric-writing, and your puppeteering.
Ahh … that would require another whole website. These days, I write for adults , but throughout the 1990s, I wrote scads of song lyrics that ended up on albums sold in Canada and the U.S. For a year or so, I also operated large hand-puppets that would sing along and dance to the tunes, working from behind my barn puppet theatre. Many thousands of children in Ontario schools and in summer resorts throughout Muskoka knew me as “Lammi” and “Lambo.” Hundreds of thousands of children grew up singing along with my lyrics in their classrooms and homes—which still thrills me. If you want to know more about the music, surf on over to Ronnosong.

That’s enough for now. If you want specifics on some awards I’ve won, keep reading. And if you have a question of your own, contact me and I’ll try to answer it. If I think others might be wondering that too, I may even post your question and my answer on this page. Don’t worry, I’ll just use your initials, unless you tell me even those are confidential!
– Judy Millar

Judy is a member of the Federation of BC Writers and the Society of Composers, Authors and Music Publishers of Canada (SOCAN). She is also a former director of WordStorm Society of the Arts.