Tattoo trouble … yours for free! Turning Pennies into Books 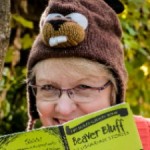 By judymillar On March 1, 2013 · 4 Comments · In Funny Business, Life and times of Judy, Uncategorized, Videos 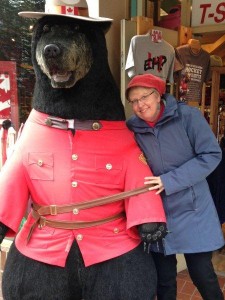 I’ve been goofing off. Instead of writing new Beaver Bluff stories or editing drafts of others, last week I took off to beautiful Victoria, B.C. I had a wonderful time with my friends—and met some new ones. Including this guy. Here’s me and the R.C.M.B. (Royal Canadian Mounted BEAR) who guards the entrance to a Victoria souvenir shop. Yup, with me, if it’s not beavers, it’s bears. Like the T-shirt behind me says, “I’m Canadian, EH!”

But Canadian (R.C.M.B.) bears aren’t the only kind in the news these days. The panda bears in the Edinburgh zoo have been getting some press too. Because it’s (ahem) that time again. Mating time. Apparently pandas have trouble getting “in the mood.” Since female pandas are only fertile a couple of days a year, the clock is ticking. I heard it through the grapevine (okay, it was this article in The Huffington Post ) that Edinburgh zookeepers have their radio station playing Marvin Gaye’s “Let’s Get it On” in an effort to get something happening. (I might have suggested Michael Bublé—but then, I’m Canadian. Maybe Scots—and their pandas—aren’t into Crazy Love.)

And if you can bear one more quick bear story—here’s a video of a bear waving goodbye. Bye for now!

P.S. What song would you play to make your panda passionate?