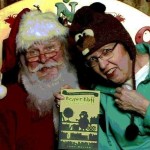 By judymillar On December 12, 2012 · Leave a Comment · In Book News, Funny Business, Let's get serious, Uncategorized

Is Santa now a quitter? And if so, who’s next? Those are some questions I’d never have thought to ask if I hadn’t read this article about self-published Vancouver writer Pamela McColl and her literary campaign for a smoke-free Santa Claus.

Apparently McColl has made it her mission to protect kiddies from the scourge of smoking by taking it upon herself to rewrite the 189-year-old holiday poem: “Twas the Night Before Christmas.” She’s removed the poem’s offending lines: The stump of a pipe he held tight in his teeth / And the smoke it encircled his head like a wreath, to put a healthier spin on the stinky scenario. (You don’t believe Santa’s a smoker? Check out Charles Santore’s illustration. Santa is caught, candle-handed, lighting his pipe. For shame, Santa.)

Ordinarily I’d stick up for the author. I know how hard it is to make eggnog money—much less a living—as a writer. Plus, I agree that smoking is a bad idea. Still, when it comes to excising or revising other people’s lines and lyrics when you disagree, I have to (cough, cough) protest.

Once we’ve put Santa on the patch, who’s next? Where will the censorship and revisionism end? I’ll tell you. If Santa is forced to quit, the forces of political correctness will move in on Frosty. You know Frosty—the “jolly happy soul, with the corncob pipe and the button nose, and two eyes made out of coal”? If that pipe of his isn’t nasty enough—just consider the risks of coal dust! Once they’ve got Frosty sufficiently sanitized for today’s toddlers, they’ll go to work on those reindeer. They may not be smokers—but they’re bullies, the lot of them. Just ask Rudolph. All of the other reindeer / used to laugh and call him names / They never let poor Rudolph / Join in any reindeer games. In this day and age, when there’s scarcely a school without a serious anti-bullying policy, can we really let these ruthless reindeer carry on unchecked?

Oh, it’s a slippery slope in the Winter Wonderland. I, for one, wouldn’t want to go there. Nor would Deborah Caldwell-Stone of the American Library Association. McColl caught the ALA’s attention with her crusade to clean up Santa’s image—or at least the poem’s offensive lines–and Caldwell-Stone is not impressed. (I’ve been trying to catch the ALA’s attention with my book of actual librarian stories. Apparently revising 189-year-old Santa lyrics is a quicker route.) 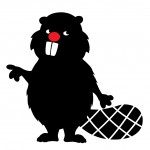 McColl may have the last laugh on both me and the ALA. Whether or not it’s kosher to tinker with 189-year-old lyrics in the name of modern sensibilities, she’s sold some 15,000 copies of her book. I should be so lucky with Beaver Bluff. I wonder if lyricist Johnny Marks would mind if I renamed my book Rudolph, the Red-Nosed Beaver.

What do you think about the rewriting of “Twas the Night Before Christmas”? Is it ever okay to change someone else’s lines or lyrics?

“Twas the Night Before Christmas” was first published (under a different title) in 1823, and has been attributed to Clement C. Moore or Henry Livingston Jr. “Frosty the Snowman” was written by Walter “Jack” Rollins and Steve Nelson. “Rudolph the Red-Nosed Reindeer” was written by Johnny Marks.